From submarines to spaceships, and testing stories to solving puzzles, I am still slightly dazed with the awesomeness that was the Polish Testing Cup 2017. As I am typing this, the WhatsApp group we created is still buzzing away with crazy ideas, encouragement and pointy-selfies.

There’s just something about being surrounded by testing enthusiasts, sharing stories and listening to inspiring people that makes me love conferences. That welcoming feeling some conferences exude started before the flight to Poland after a crazed run to the airport. All train traffic was suddenly redirected away from the airport and I had to hop onto another train & then quickly grab a taxi with a whole bunch of strangers who were also stranded. Frantically rushing to the gate, I found myself warmly greeted by Beren van Daele, Ard Kramer and Andreas Faes, who I’d met at TestBash, DEWT7 & the Romanian Testing Days.

Upon arrival at Gdansk, Testing Cup had arranged a taxi to meet us. It still feels luxurious to see my name written down and the taxi driver waiting. A sushi-burger debate later, we all found ourselves at a pizza place where we relaxed and chatted, while event-organizer Joanna Mocko sent us teasing photographs of the ongoing preparations for the competition.

When we arrived at the conference venue the next morning, the energy hit us straight away. Hundreds of testers eagerly and frantically testing away at the brand-new Mr Buggy application, making test plans, reports and finding all kinds of creative bugs. It was energizing to watch!

While the competition was in full swing, I attended Beren & Ard’s workshop: The Quest for the Ultimate Testing Story. Using the brilliant game TestSphere, we told and listened to all kinds of stories. Ranging from the world of medical equipment, where a nightly build mysteriously broke for nights on end, while the day-time tests showed no issues altogether, to helping out a friend by testing their application, experimenting with SQL injection and accidentally throwing out the entire application’s database. The stories TestSphere draws out are intriguing, educational and engaging. I love the game, use it to brainstorm all the time and am exciting to be playing it in office next week! (If you’re interested in the game, find more info here at the Ministry of Testing.)

Peter Madsen’s keynote From the Ocean Floor to Space was delivered in the stadium, and it is hard to imagine a more suitable location for such a speech about dreaming big and making dreams real (sound-issues aside). The first submarine Peter tried to build at age 11 sank mercilessly into the water when he pushed the wheelbarrow slightly too far. A few years later, he tested out his new and improved model in the harbour and had a glimpse of the magnitude he was attempting: the only proof up to this point that it would work was the math. Testing as if your life depended on it is true in situations like building a submarine or a space ship.

What struck me about his talk was a small comment he made: ‘often we are trained to see the problem, not the opportunities.’ We hold ourselves back from realizing our dreams, because our mind easily conjures up bears on the road. Peter’s testing of the submarine was not unduly dangerous. Just like with regular diving, there are many safety and back-up procedures in place, and thinking logically, creatively and conceptually gets you through many situations you had not previously conceived of as potentially occurring.

Peter had a dream of something he wanted and started building it without having all the funding in place. As the submarine started to look like an actual submarine, sponsors became interested and support was found as the build progressed, keeping the project afloat as it were. This is exactly what I found happening when I recently organized a few events. The moment I switched the statement from: ‘I’m thinking of doing this’/’I’d like to do this’ to ‘I’m organizing this’, support and funding started pouring in.

The story of how he launched his first space ship intrigued me. Looking for ways to launch the rocket and all the bureaucracy that is involved, he found that you don’t actually need permission to do so. You just announce your intentions, so that people (and governments) are aware, and proceed with actually doing it. How often do we think we need permission, and are so afraid of not gaining that permission that we just don’t do it at all? When I mention my motto: ‘don’t ask for permission, beg forgiveness instead’ what matters to me is to clear that mental block. Even if we don’t get forgiveness after our actions, what I’ve often found is that I needed neither permission nor forgiveness to act on what matters to me. (Obviously talking with the scout motto in mind: leave things better than you found them a.k.a. don’t hurt people).

This year’s program chair was Zeger van Hese. I first met Zeger in December 2015 when he gave his presentation Testing in the Age of Distraction at my local office and met him again at EuroSTAR 2016 and conferences since. His sketchnotes are amazing and this November, he’ll be offering a tutorial on sketchnoting at EuroSTAR. I’m signed up for it and in the spirit of experimentation, creativity and doing things that scare you, here’s my first-ever attempt at a sketchnote:

At conferences, you expect to find yourself at the conference venue, the hotel and a few restaurants. I didn’t know what I expected of the Testing Cup party on Thursday evening, but a grand fire show and standing in the cold sea water of the Baltic Sea and enjoying the amazing view was not necessarily included in my expectations. 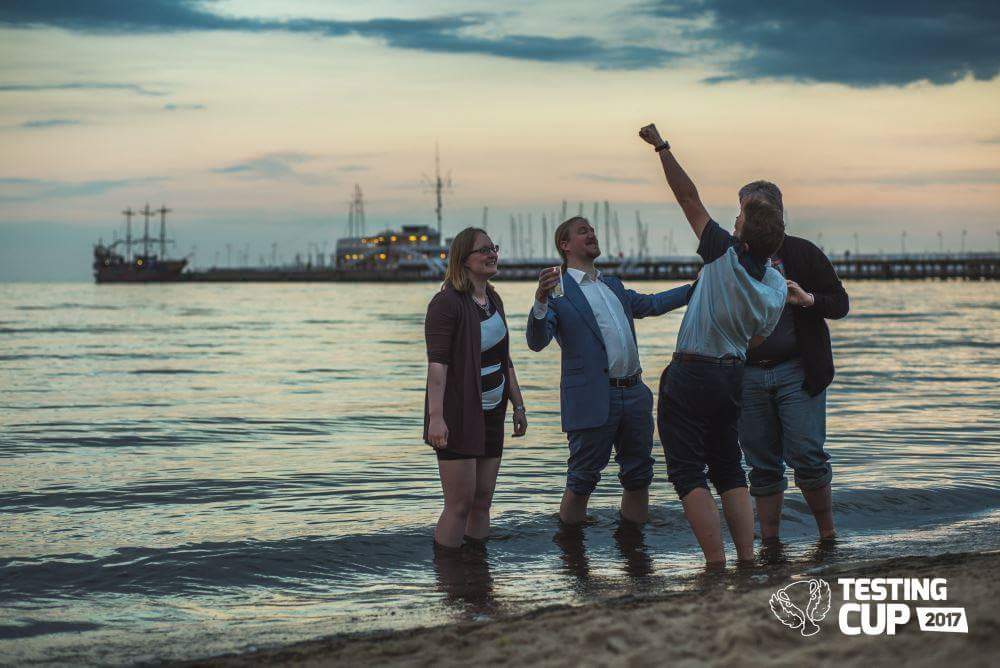 The next morning, I chose to spend some time doing last-minute revisions, practicing more and getting rid of some nerves for my presentation later that day. Luckily, all the presentations were taped and are being published on YouTube, so I’m having a blast catching up with some of the sessions now. (Great practise to try out this sketchnoting thing too).

Johan Sandell’s Testing through the Log File started with Johan’s statement that log files were gibberish to him when he started out, but now, they are like reading a novel. They give so much potential information: who? what time? What was the outcome? His presentation focused on how we can use log files to track our user, follow them and see what they do with our software in reality. What features do they actually use? What routes do they take through our system? Some bugs can only be found through the logs. You don’t notice anything obvious, but something did crash.

Maria Kedemo’s keynote: Dimensions of Testability was fun, engaging and inspired me to try to summarize her session in another sketchnote:

All too soon, my own presentation entitled ‘Asking Else – The Power of a Tester’s Mindset’ was right around the corner. I had fun on stage, enjoyed the responses from the audience and look forward to improving the presentation for EuroSTAR in Copenhagen in November. (Any feedback is welcome – @Beren: thanks for yours 🙂 )

Ben Simo’s keynote An Incredible Mess closed of the official conference, and having heard his presentation before at EuroSTAR in Stockholm, I enjoyed sitting back and listening to his story. The stories continued in the evening, with a lovely dinner with some of the speakers, and in the WhatsApp group ever since.

What I’ll remember of this conference is the energy and the excitement. It is the warm and welcoming atmosphere. The weird taxies, the brilliant people and the lovely stories everyone told. The craziness of pointy selfies and the sheer fun of being surrounded by enthusiastic testers and people. What I love is the availability of the videos online, so that I can still enjoy the presentations now that I’m back home, and catch up on some presentations I missed on the day itself. Thanks for having me in Poland. I look forward to attending TestingCup again in the future.